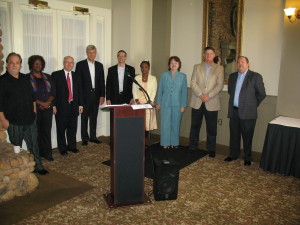 The Small Business Samaritan concept was created by Phillip Saxton after observing that many businesses created by hardworking entrepreneurs never quite live up to their expectations or capability. This lack of performance has less to do with being undercapitalize than having knowhow and the good fortune of having expert help come along side of them to help with business development. Having business mentors in developing and running a business is just as important as any other element.

Mr. Saxton has the experience of starting and operating many small businesses. From being named Small Business Commissioner for the State of Indiana to being invited to the White House to meet with President Reagan as a small business leader.

Mr. Saxton formally was Vice President of eBusiness for the Unisys Corporation.  Prior to assuming his position as Vice President, he was National Director of eBusiness Development. Before assuming his duties in eBusiness Development, Mr. Saxton was Southern Regional Manager (responsible for 14 states and Washington, DC) for Unisys.  He has worked for IBM in various sales management and corporate management positions, including sales management training; worked for Digital Equipment Corporation as Sales Director for large systems accounts and as Business Development Manager. Mr. Saxton has sales and consulting experience, working in fourteen different industries providing him with an in-depth background of the internal workings of most businesses including Internet based companies.

Mr. Saxton has trained thousands of sales people in the art of making sales calls, presentations and closing business. He was an Education Center manager for IBM where he helped develop detailed sales methodologies that the company used in training sales people and sales engineers from all over the world.  Mr. Saxton also developed the Logical Selling Process which provided IBM sales people with great advantages over competitors.

Mr. Saxton has received numerous awards and citations. He has served as a member of the Private Industry Council, 100 Black Men, board member of over ten companies and not for profit organizations and won the coveted CASPER award in Journalism for his leadership of VISIONS Magazine.

In addition, Mr. Saxton was a member of the Planning Advisory Committee, of the Board of Commissioners and helped complete the 2030 Gwinnett County Unified Plan. He was also a member of the Partnership Gwinnett committee working with Gwinnett County leaders on improving the quality of education. He is also a charter member of the Dacula Lions Club, and a basketball coach in recreational basketball for teens and adults. Mr. Saxton was board Chairman of the Gwinnett County Library system. His library responsibilities included running 16 library locations including Gwinnett Technical College. He is a board Chair of Bethany Christian Services of Georgia and board member of Each One Teach One.

Mr. Saxton is a Bible Study leader and developer of the Newness Of Life training program and daily motivational messages.

Mr. Saxton has put together a wonderful team of professionals to aid and assist with the creation and implementation of the Small Business Samaritans concept.